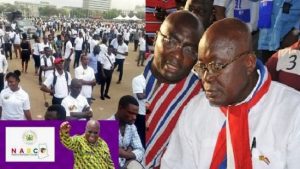 Mid Year Review: NABCo personnel to be paid, integrated into YouStart; date revealed The government will utilize today’s mid-year budget review (MYBR) to address the plethora of issues confronting the Nation Builders Corps (NABCo) program, which was launched in 2018 to offer jobs for the teaming youth. It is likely to announce a comprehensive effort to incorporate the recipients into the YouStart program, another government initiative.

The activity would also assist in clearing the outstanding debts owing to the thousands of young people participating in the program in the coming months, as part of measures to alleviate the load on the youngsters.

Mr. Ofori-Atta, the Finance Minister, is anticipated to reveal these and other youth-focused programs today when he stands in Parliament to deliver his sixth MYBR in a row. IMF deal It comes at a time when the government has started discussions with the International Monetary Fund (IMF) for a programme to shore up the country’s balance of payment position.

It is understood that the presentation would also seek to rally the nation behind the prospective IMF programme in line with the government’s agenda to fast track the economic recovery and ease the burden on the citizens. Mr Ofori-Atta is expected to use the opportunity to call for a non-partisan support for the programme, which it said was occasioned by the ravages of the COVID-19 pademic and the Russia/Ukraine conflict.

Free SHS He would also assure Ghanaians that the government would work to protect its social intervention programmes in any discussion to improve upon the fortunes of the economy. Of particular interest would be the free senior high school (SHS) programme, the school feeding programme and the Agenda 111, which have come under serious criticism in recent times, following concerns over expenditure pressures.

People familiar with the review process said Mr Ofori-Atta would announce measures to protect those programmes from any expenditure cuts as part of a broad strategy to insulate the vulnerable from the fallouts from any fiscal consolidation exercise. Derailment He would also reiterate the need for perspective to the challenges facing the country, with emphasis that until the COVDI-19 pandemic and the Russia/Ukraine crisis derailed the government’s agenda, the government was on course to building a sound economy that could stand the test of time. Consequently, the minister is expected to call on Ghanaians to support the government as it navigates the tough challenges of bearish commodity prices, record-high global inflation and weak growth amid growing concerns of debt pressures. The support is needed to stabilise the economy and improve upon their living conditions. About YouStart Announced in the 2022 budget, the YouStart programme is a novelty by the government to promote entrepreneurial activities and provide jobs, particularly for the youth. It is the government’s special purpose vehicle to provide funding and technical support to the youth and youth-led enterprises to assist them start, build and grow their own businesses.

Mr Ofori-Atta told Parliament earlier this year that the government, in collaboration with the National Entrepreneurship and Innovation Programme, the Ghana Enterprises Agency, faith-based organisations, and financial institutions, will provide loan packages ranging from GH¢50,000 – GH¢500,000 to youth-led enterprises and Small and Medium-scale Enterprises (SMEs) under the YouStart initiative. He said such businesses would also be supported with technical skills, training as well as mentoring, to enable them develop commercially viable enterprises.

The minister was optimistic that these would lead to an increase in economic activities and contribute to the reduction in the cost of living as incomes are earned and output is produced. Sources said the integration of the NABCo personnel into the programme would help to strengthen it while addressing the issues of allowances that has long bedeveiled that programme.

Tags
and Be integrated into Nabco paid To TRAINEES

Govt urges NaBCo trainees to engage in YouStart after programme ends on September 1, 2022

2024 presidential seat will be won by female – Prophet Badu Kobi

When did walking to a place become a crime in this country? – Sued NDC MP asks police